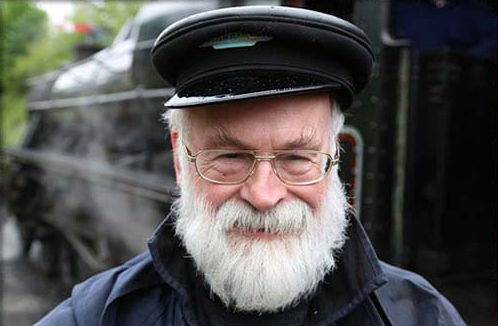 As the 28th April was Terry Pratchett’s birthday, we want to reclaim the day for him and we hope you’ll join us! We’d like to make Terry Pratchett Day a time to remember and celebrate the author who ignited our imaginations and made us all laugh so much.

Here are a few ways you can join us in celebrating Terry Pratchett Day: 1. Add the bananas, vanilla ice cream and milk into a blender. Whizz them all up until smooth, then pour into a tall glass.

2. (Optional) To make the milkshake taste even closer to Terry Pratchett’s drink of choice, you can add ¼ cup of coconut rum to the mix, and blend well.

3. Now it’s time for the fun bit – decorating! Top the milkshake off with a big spoonful of whipped cream (you can also use whipped cream from a can) and decorate with whatever you like – our favourite decorations include banana chips, a cherry or two, and hundreds and thousands.

4. Serve immediately with a colourful straw, and don’t forgot to toast to Terry Pratchett – this drink was invented in his honour, after all!

We’d love for you to share your creations with us on the social media platform of your choice using #AToastToTerry. We’ll share the best pictures here and on Terry’s Facebook page.

DONATE TO ONE OF TERRY’S FAVOURITE CHARITIES

Sir Terry Pratchett was Patron of Alzheimer’s Research UK. Visit the website for more information and details on how you can help support the research.

A UK charity that campaigns for change, funds research to find a cure and supports people living with dementia today.

Terry was a trustee for the Orangutan Foundation UK and one of his most popular Discworld characters, the Librarian of the Unseen University’s Library, is a wizard in the body of an orangutan. Visit the website to find out more about these endangered apes and discover how you can help.

The Research Institute for the Care of Older People is intended to advance the knowledge and treatment of the more serious conditions affecting older people, in particular Alzheimer’s disease and other forms of dementia. Sir Terry and his family together with his friends and fans were great supporters of The RICE Centre, and money is still raised in his name.

Share your favourite Terry Pratchett moment on your social media platform of choice on 28th April with #TerryPratchettDay. This could be your favourite quote, book, character, series, TV or film adaptation, or more simply what Terry means to you. The choice is yours: whatever you’d like to share, we’d love to see.