Read an extract from Monstrous Regiment 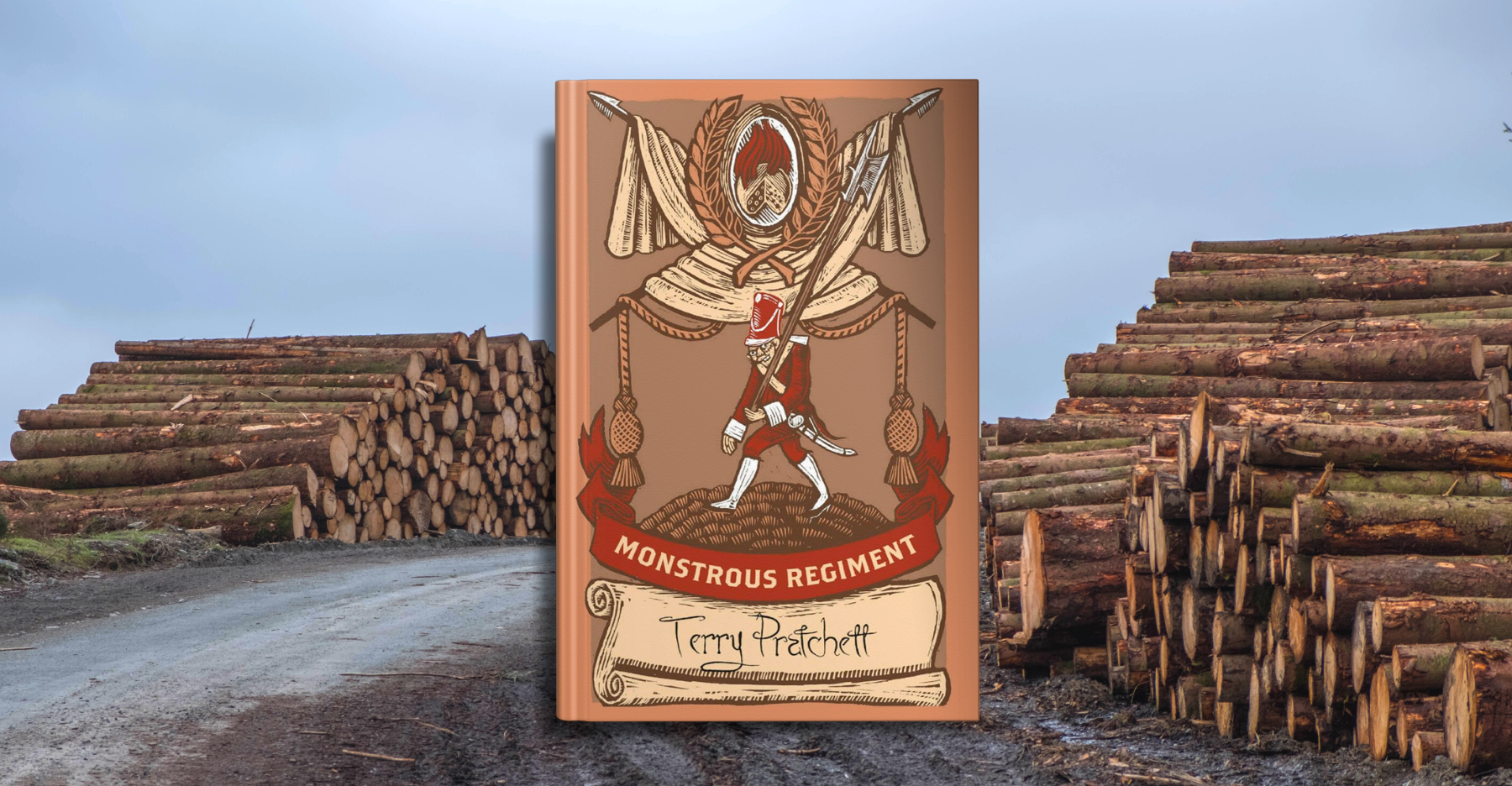 Women belong in the kitchen – everyone knows that. Not in jobs, pubs or indeed trousers, and certainly not on the front line.

Nonetheless, Polly Perks has to become a boy in a hurry if she wants to find her missing brother in the army. Cutting off her hair and wearing the trousers is easy. Learning to fart and belch in public and walk like an ape takes more time.

Polly cut off her hair in front of the mirror, feeling slightly guilty about not feeling very guilty about doing so. It was supposed to be her crowning glory, and everyone said it was beautiful, but she generally wore it in a net when she was working. She’d always told herself it was wasted on her. But she was care- ful to see that the long golden coils all landed on the small sheet spread out for the purpose. If she would admit to any strong emotion at all at this time, it was sheer annoyance that a haircut was all she needed to pass for a young man. She didn’t even need to bind up her bosom, which she’d heard was the normal practice. Nature had seen to it that she had barely any problems in this area.
The effect that the scissors had was . . . erratic, but it was no worse than other male haircuts here. It’d do. She did feel cold on the back of her neck, but that was only partly because of the loss of her long hair. It was also because of the Stare.

The Duchess watched her from above the bed.

It was a poor woodcut, hand-coloured mostly in blue and red. It was of a plain, middle-aged woman whose sagging chin and slightly bulging eyes gave the cynical the feel- ing that someone had put a large fish in a dress, but the artist had managed to capture something extra in that strange, blank expression. Some pictures had eyes that followed you around the room; this one looked right through you. It was a face you found in every home. In Borogravia, you grew up with the Duchess watching you.

Polly knew her parents had one of the pictures in their room, and knew also that when her mother was alive she used to curtsy to it every night. She reached up and turned this picture round so that it faced the wall. A thought in her head said No. It was overruled. She’d made up her mind.

Then she dressed herself in her brother’s clothes, tipped the contents of the sheet into a small bag which went into the bottom of her pack along with the spare clothes, put the note on her bed, picked up the pack and climbed out of the window. At least, Polly climbed out of the window, but it was Oliver’s feet that landed lightly on the ground. Dawn was just turning the dark world into monochrome when she slipped across the inn’s yard. The Duchess watched her from the inn sign, too. Her father had been a great loyalist, at least up to the death of her mother. The sign hadn’t been repainted this year, and a random bird-dropping had given the Duchess a squint.

Polly checked that the recruiting sergeant’s cart was still in front of the bar, its bright banners now drab and heavy with last night’s rain. By the look of that big fat sergeant, it would be hours before it was on the road again. She had plenty of time. He looked like a slow breakfaster.

She let herself out of the door in the back wall and headed uphill. At the top, she turned back and looked at the waking town. Smoke was rising from a few chimneys, but since Polly was always the first to wake, and had to yell the maids out of their beds, the inn was still sleeping. She knew that the Widow Clambers had stayed overnight (it had been ‘raining too hard for her to go home’, accord- ing to Polly’s father) and, personally, she hoped for his sake that she’d stay every night. The town had no shortage of widows, and Eva Clambers was a warm-hearted lady who baked like a champion. His wife’s long illness and Paul’s long absence had taken a lot out of her father. Polly was glad some of it was being put back. The old ladies who spent their days glowering from their windows might spy and peeve and mumble, but they had been doing that for too long. No one listened any more.

She raised her gaze. Smoke and steam was already rising from the laundry of the Girls’ Working School. It hung over one end of the town like a threat, big and grey with tall, thin windows. It was always silent. When she was small, she’d been told that that was where the Bad Girls went. The nature of ‘badness’ was not explained, and at the age of five Polly had received the vague idea that it consisted of not going to bed when you were told. At the age of eight she’d learned it was where you were lucky not to go for buying your brother a paint box. She turned her back and set off between the trees, which were full of birdsong.

For readers in the UK, Monstrous Regiment is available in ebook for just 99p until the end of July 2020. You can purchase it HERE: